The creation of specialist engineer Carl Wadkin-Snaith over a period of 4 years.

No castings were used for the engine and gearbox as all components were machined from solid using non C&C machines.

It has performed very successfully and always attracts a lot of attention and has won many awards at various shows.

This machine is truly an interesting  work of art and would look well as an exhibit in any collection or museum.

By early 2012 and after 8 years of development, the latest project, my wife’s Honda 1978 CB125T based race bike had reached a peak: any improvement on her astonishing 15.61/84mph record would be hard to achieve. It was at this point she suggested that after 30+ years of building race bikes for herself and our kids perhaps it was time I built one for myself. After browsing ‘The Vintage Years at Brooklands’ I decided on a 500 single. Conceived as a bike that might have been built near the legendary Brooklands circuit 1929ish, the bike is not a replica of any prototype, rather I tried to capture the spirit of the time and place. The late 20’s was a time of experiment and transition, giving me maximum freedom in design.

It was never intended it to be a concours exhibit; rather an oil spattered period racer. The engine would be substantially constructed as I intended to race at National Sprint Association events and might supercharge it in the future. I also decided that I wouldn’t use any genuine vintage parts, believing rather these should be used on vintage bikes.

Making a crank and gearbox internals seemed a unnecessarily time consuming, so I selected the Suzuki DR800 engine as a donor for it’s huge 90mm stroke and purchased one from a breaker on eBay. The plan was to use a Velocette piston for a long stroke 500cc. But on stripping the engine it turned out to be a 750 with 6mm shorter stroke, at this point my Father unfortunately died and returning the engine was obviously not a priority, so when work started again a Yamaha SR500 piston was selected for 500cc.

CAD design work began in April 2012. Much midnight oil was spent with my artist’s hat on to arrive at an aesthetically pleasing result, for example the cant of the engine was varied in 2° increments back and forth until I was happy.

The DR engine has conventional modern gear primary drive on the right and rotates forward, I needed chain primary on the left to look period correct: As a consequence the engine had to rotate backwards, driving the upside down, flipped over DR gearbox internals in reverse for forward motion! It all sounds a little unlikely, but the gearbox dogs are not undercut and I’m relieved to say it all worked fine.

Metal cutting began in late June 2012, all work carried out at my home workshop in my spare time, no castings are used, everything carved from solid billet on my manual milling machines and lathes (no CNC). A vast amount of time was spent hand finishing the billet parts which I then bead blasted to give the illusion of castings. Much of the really tricky machining, of crankcase webs for example, was done on my trusty pre-WW2 Alexander Master Toolmaker milling machine, whereas the heavier work was completed on my large turret mill.

I added a second, smaller main bearing on the left (now drive side) of the crank and used the former alternator taper to attach the primary drive sprocket. I was a little concerned about this, but it has endured a number of full throttle, wheel spinning launches without problems. Despite the fact that the DR engine has a balance shaft, and I didn’t alter the crankshaft balance factor, the engine is remarkable smooth for a 500cc single. The barrel was machined from 6½” diameter aluminium bar with a cast iron liner. I designed the cylinder head with very shallow valve angles using 2 of the DR’s 4 valves to get a hefty compression ratio with the SR500 piston’s low crown (approximately 10.6:1 in the event), valves are a little small but I was aiming for maximum torque rather than high horsepower. I had Serdi UK fit the valve seats and machine the valve faces to suit, rockers and shafts are fabricated, with splined bimetal arms at the pushrod end and pushrods are tubular aluminium with steel ends.

The cam profile is based on a very successful one I created for our son’s Honda PC50 based sprinter decades ago, and is created by milling a series of flats and then filing these smooth. Consideration was given to having a dummy magneto containing electronic
ignition but after discovering period racing bike experiments with total loss battery ignition, it was decided to have the ignition on the end of the cam and drive the oil pump from the cam wheel. This pump is my own design; a simple feed and scavenge gear type. There are feeds to the end of the crankshaft and the camshaft/follower interface, scavenge from the bottom of the crankcase and the timing cover, the latter prevents excess oil leaking past the seal onto the digital ignition circuit board. I used the Pazon digital ignition; a very impressive unit with built in timing light and digital advance etc.

I agonised over the carburettor for some time, even considering making my own but decided to go with the Mikuni Yamaha SR500 race carburettor as I hoped this would avoid aggravation setting up, this proved to be the case, only needing a change of pilot jet.

The clutch was converted to chain driven dry operation by cutting off the primary drive gear and replacing it with a custom made sprocket incorporating the DR shock absorbing springs. The DR lifting mechanism is in the clutch cover, pulling the clutch off and obviously not suitable. By drilling right though the gearbox mainshaft I was able to convert the clutch to push off from the opposite side in the conventional manner. Despite now running dry the clutch works fine. Replicating the complex die cast interior of the Suzuki gearbox casing was probably the most difficult task in the whole construction saga. Initially I set the bike up with hand/knee change, partly because I had a nice piece of teak to make the knob; more on this later.

The frame is my own design and manufacture and aimed at spinning the wheel rather than wheelying. I took a punt at the unidentified bare girder fork blades on eBay after no one showed interest, these were then bushed and a stem, spindles, links, yokes, steering damper etc made to suit. The spring is a modified auto jumble find. I bent the handlebars myself for the authentic Brooklands style, this proved to be a mistake as they were incredibly uncomfortable and impractical, they have since been replace with some flat bars. I was not happy with the quality of commercial classic style throttle and handlebar controls, the chrome plate just looked totally wrong too so I carved the clamps, choke control and a quick action throttle from billet steel. None period ball end levers are necessary to comply with ACU Regs.

Front wheel is a from a Yamaha DT50 (21” rim) though I made a new period style backplate with anchor to suit my forks, plus an aluminium brake lever. Rear hub is from a Honda CB250RSA, much modified and laced into a 19” rim. Chainguards made to suit, the primary one having a quickly detachable outer plate as this is required for ACU competition events. I bent up the exhaust pipe with the characteristic large radius front bend myself and made the Brooklands can as the ones available just weren’t right for the period, theoretically this should not protrude beyond the rear wheel for ACU sprints, though no one has noticed yet.

The oil tank was a piece of cake compared to the petrol tanks: Fortunately only the right one needed to be leak free as the left is a dummy containing the Pazon ignition module, coil, ignition switch and gel battery (mounted upside down) for the total loss system. As a result the whole electrical system can be removed as one unit in minutes. At Brooklands in the 1920’s, riders often strapped cushions to the petrol tank to protect themselves from the terrible pounding lapping the bumpy track, I decided to go the way of the more upmarket teams and carved a shaped foam pad which was beautifully covered in leather by Chris at Equinox Customs near Bristol. This is secured with a couple of charity shop sourced leather belts. Apart from the exhaust pipe and handlebars I dull nickel plated everything myself. Fasteners are all stainless steel, the heads of commercial bolts were machined flat to be more in keeping with my period. Naturally I used slotted screws and traditional fabric insulation tape where necessary.

A final touch was to design a logo and have it hand painted on the tanks by our daughter. The compass rose is a nod to my nautical past and our surnames incorporate an ‘N’ and ‘S’ at appropriate points, I’m a Northerner and my wife is a Southerner! I’ve since engraved the logo on various other parts such as ignition cover, steering damper and handlebar controls. I must say it was very satisfying to engrave ‘Made in England’ on the crankcase and gearbox housing. Having made some starting rollers; on the 3rd August 2016 I spun the engine over, dropped the clutch and the engine fired up almost instantly, a very satisfying moment after over 1000 hours in the workshop! It’s first run at the sprint track was in October 2016: A full throttle launch in 1st produced lots of wheelspin, a small wheelie and threw me backwards so far I couldn’t knock the hand change into 2nd with my knee as planned. A couple more runs showed the hand/knee change was totally impractical so it was changed to right foot over the winter.

Since then I’ve refined various features, added an oil filter in the scavenge return and making primary chain adjusters. At the Brooklands Museum the bike flies up Test Hill, in fact the wide ratio DR750 gear set is ideally suited to the engine.

The bike has proved an ideal publicity vehicle for my one man business resulting in some interesting projects, for example:
A commission to design and build the new vintage style Wardill Motorcycle, subsequently officially launched at the Brooklands Museum in 2018, I recently completed the first production model.
A one off fishtail silencer for the Perry Barwick/Brooklands Museum Freddie Clarke Triumph Tiger 80 replica, created using the only existing photo of the bike.
A new billet front brake back plate incorporating improvements for a Parilla 175 MSDS racer.

My Brooklands SS has been exhibited at two shows and won an award at both. It is always satisfying when older enthusiasts are thrown by the bike believing it to a genuine 20’s racer, however when an auction house valuer said he could see it on display in a collector’s house as a work of art I was delighted. I wonder what my Art School tutors would have thought? 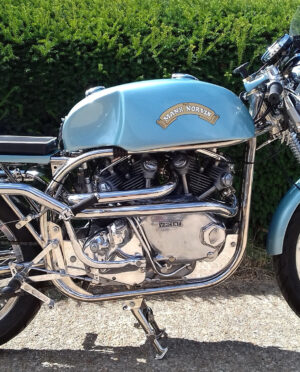 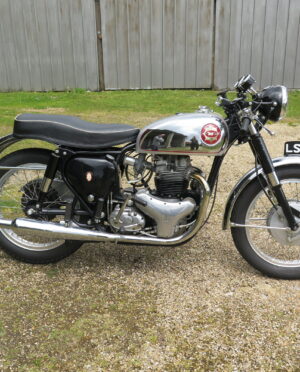 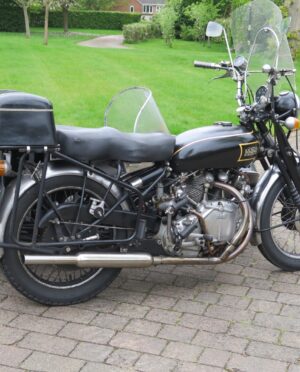 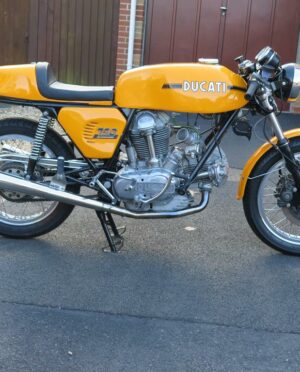 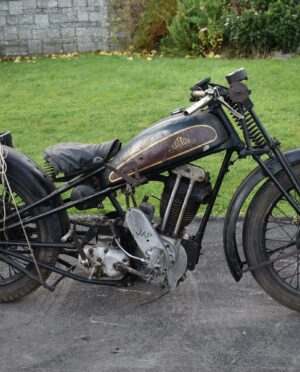 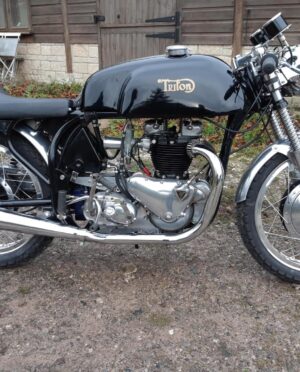 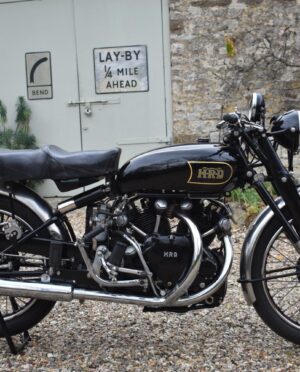